Washington Commercial Lease Agreement
0.0 rating based on 12,345 ratings
Overall rating: 0 out of 5 based on 0 reviews.
Anonymous

The Washington Commercial Lease Agreement is a form which is essential for the purposes of leasing a premises, for activities which are commercial in nature. The property must be within the state of Washington.

The form is for leasing a premises for commercial purposes only, it cannot be used for another purpose. The commercial practices must also be legally allowed on the premises. The form is an agreement between the lessor and the lessee.

The top of the form has lines for a return address in case the form is lost. It is followed by a section for indexing information, which is required by the Washington State Auditor’s office. It is followed by the section in the form of fill in the blanks. The date, names and addresses of the lessor and the lessee are to be filled in this section.

This is followed by a description of the premises, which is being leased. The term of the lease is described next, along with the start and end of the lease. The next point is about where rent would be paid and in what amount it would be paid to the lessor. It also mentions the service charge levied on the payment, in case of late payments.

Next section covers the cost of utilities to be paid by the lessee and a list of utilities which are included in the rent. It is continued by various points regarding the attorney fees, provisions in case of damages and repairs. Point 6 describes the purpose for which the premises will be used and is followed by addresses of both the lessee and the lessor, where they can be reached in order to communicate. 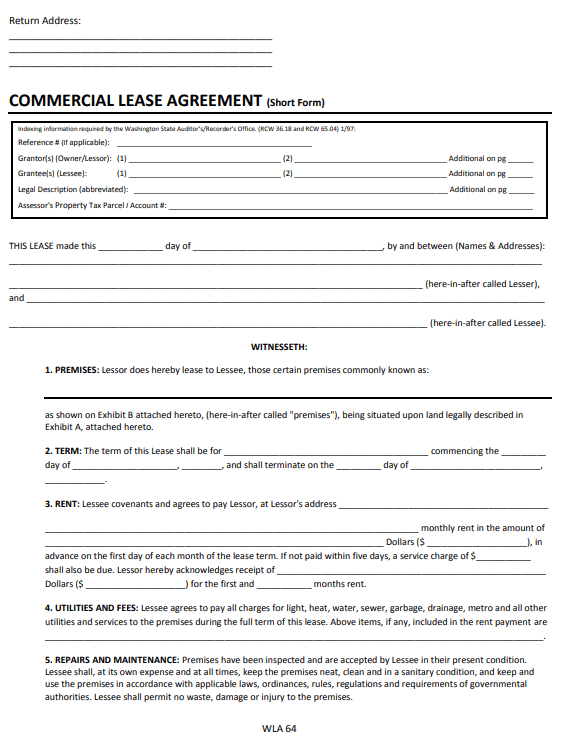